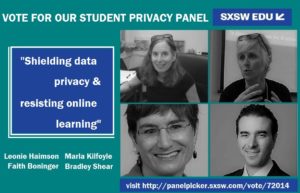 Each spring, thousands of edtech entrepreneurs, and advocates funded by the edtech industry, descend upon Austin’s SXSWEdu conference to promote their products and publicize their point of view. For example, it’s where Bill Gates launched inBloom Inc. in 2013, to push the expansion of data-mining student personal information and online learning. Rarely do you bump into any classroom teachers, parent leaders or grassroots education activists attending, much less find one on stage. We hope to change that in 2018.

Please help us by voting for our panel proposal “Shielding data privacy & resisting online learning.” Our speakers include Leonie Haimson, co-chair of our Parent Coalition for Student Privacy who helped lead the fight against inBloom Inc., attorney and privacy activist Bradley Shear, who has proposed an annual National Student Data Deletion Day, research associate Faith Boninger, who has written extensively on privacy for the National Education Policy Center, and Badass Teachers Association (BATS) Executive Director Marla Kilfoyle. The BATs NEA Caucus supported, and pushed for, several pro-privacy and anti-online learning resolutions that were adopted at the recent NEA Representative Assembly. For more information about our proposal, click here or visit http://panelpicker.sxsw.com/vote/72014).

To submit your vote:

The more votes we get, the better our chances of being selected – so please vote today and ask your friends to vote too! The voting window closes Friday, August 25th.

In spring of 2013, Bill Gates took the stage at SXSWEdu to unveil inBloom, his foundation’s $100 million student data collection project which was being piloted in nine states and school districts across the nation. inBloom surfaced in every corner of the conference that year with parties, meet-ups, and a code-a-thon where cash “bounties” were awarded to teams who developed the best apps using the inBloom data store.

At the same time, parents whose children’s data was going to be ensnared in the project were raising their voices in opposition – concerned about how inBloom threatened student privacy and could accelerate the use of online learning. After considerable parental backlash, inBloom shuttered its doors in 2014. Shortly after, parents involved in the fight formed the Parent Coalition for Student Privacy.

Since then, student data privacy has gained national attention and SXSWEdu has featured countless workshops and presentations on the subject – including on the reasons for inBloom’s demise, without inviting a single parent involved in the fight to explain their opposition. We want to change that next year by going directly to the belly of the beast, and inviting others who are active in the resistance movement on the ground to protect student privacy and prevent the expansion of online learning to join with us. You can help by casting your vote in support of our panel here!