See also our press release and our letter to the Commission, sent Nov. 14, 2016.

Recently Dan Greenstein, director of the Gates Foundation ‘s Postsecondary Division, released the Foundation’s top advocacy priorities for 2017.  Chief among them was to “push Congress” to overturn the prohibition against the federal collection of personal data of all students, called the federal student-unit record system.   More on this here.  The ban on the federal government collecting the personal data on all students has existed since the Higher Education Opportunity Act of 2008, in 20 U.S.C. sec. 1001.

The Commission on Evidence-Based Policymaking (CEP) was established by Congress last year.  One of the goals of this Commission is to consider “whether a Federal clearinghouse should be created for government survey and administrative data.”  The Commission held hearings in DC on October 21, 2016.   At the hearing, several Gates-funded groups testified, including New America, Data Quality Campaign, Education Trust and Young Invincibles.

All these organizations testified in favor of overturning the ban on federal student-unit record system, or to weaken the ban. Though they said the purpose of this would be to allow for “improvements in information on postsecondary progress and outcomes,” but the actual goal of the Gates Foundation and their allies is far more ambitious: to allow for the creation of a “national data infrastructure” that would incorporate the personal data on all public school students, starting in preK through high school, college and beyond, and to connect all data now held by different state and federal agencies.  This was revealed in the summary and chart in the Gates Foundation’s recent report on their top advocacy priorities:

Support the development of a comprehensive national data infrastructure that enables the secure and consistent collection and reporting of key performance metrics for all students in all institutions. These data are essential for supporting the change needed to close persistent attainment gaps and produce an educated and diverse workforce with career-relevant credentials for the 21st century.

A chart was included to demonstrate the overarching and comprehensive nature of the data infrastructure envisioned: 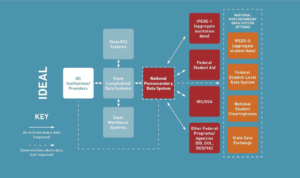 On November 14, the Parent Coalition for Student Privacy sent a letter to the Commission to strongly oppose the overturning of the ban on a proposed federal student-unit record system.  Groups that signed  include the ACLU, Network for Public Education, NPE Action, Parents Across America, and NY State Allies for Public Education. We believe that the potential risks to student privacy that such a centralized, comprehensive federal database are enormous, as expressed in our press release.

Please send your own comments to the Commission, in opposition to allowing the federal government to collect personal data and track every public school student in the nation.

Below are instructions on how to submit your comments, as well as a sample comment you can use,  but please feel free write your own and/or edit this any way  you wish.

Thanks!  Rachael and Leonie, Parent Coalition for Student Privacy

I strongly oppose any proposal that would lead to the creation of a centralized, federal clearinghouse of the personally identifiable information of all students, commonly referred to as a student unit-record system or national database.

The risk that such a federal database would pose to student privacy is immense; including the very real possibility of breach, malicious attack, or the use of this information for purposes not initially intended.  Ever since a federal student unit-record system was banned by the Higher Education Act in 2008, the reasons against creating it have only become more compelling.

In the past few years, much highly personal data held by federal agencies has been hacked, including the release of the records of the Office of Personnel Management involving more than 22 million individuals, not only federal employees and contractors but also their families and friends.

The US Department of Education has been found to have especially weak security standards in its collection and storage of student data, and received a grade of D for its security protections.

In addition, preK-12 student data currently collected by state departments of education that would potentially be shared with the federal government include upwards of 700 highly sensitive personal data elements, including students’ immigrant status, disabilities, disciplinary records, and homelessness data.

I am also very concerned about recent revelations of the widespread surveillance on ordinary citizens by the federal government, and the way in which a national student data system would be used to expand the tracking of students from PreK into high school, college, the workforce and beyond. A federal data clearinghouse of student information could effectively create life-long dossiers on nearly every individual in the nation.

I urge you to strongly oppose the creation of any centralized federal data system holding students’ personally identifiable information and to support the continuation of the  ban in the report you provide to Congress.

Yours,  [name, state, and organization affiliation if any]