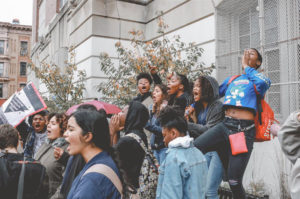 On November 5, about 100 students at the Secondary School of Journalism in Brooklyn walked out of their schools to protest the Summit online program.  This digital instruction program, funded by Mark Zuckerberg of Facebook and Bill Gates, forces students to spend hours staring at computers, left at sea with little human interaction or help from their teachers, all in the name of “personalized learning.”

As one of the students, Mitchel Storman, said to Sue Edelman who reported on the protest in the NY Post, “I have seen lots of students playing games instead of working….Students can easily cheat on quizzes since they can just copy and paste the question into Google.”

Senior Akila Robinson said she couldn’t even log onto Summit for nearly two months, while other classmates can’t or won’t use it. “The whole day, all we do is sit there.”  A teacher said, “It’s a lot of reading on the computer, and that’s not good for the eyes. Kids complain. Some kids refuse to do it.”

The online program, which originated in the Summit chain of charter schools in California, and was further developed and expanded with millions of dollars from the Gates Foundation, Facebook and now the Chan Zuckerberg LLC, has now been inserted in more than 300 or so public schools, collecting a huge amount of personal data from thousands of students without their knowledge or consent or that of their parents.

I have been writing and questioning Summit for the past two years, and last year, met with Diane Tavenner, asked her all sorts of questions she never responded to, and toured her flagship charter school in Redwood City.  My description of this visit is here.

Since then, parents in 15 states have reached out to me in distress about the negative impact of this program on their children. Many report that their children, who had previously done well in school,  now say that they aren’t learning, that they feel constantly stressed, are beginning to hate school and want to drop out. Some parents have told me that they are now homeschooling their kids or have decided to sell their homes and move out of the district.

Recently it was disclosed 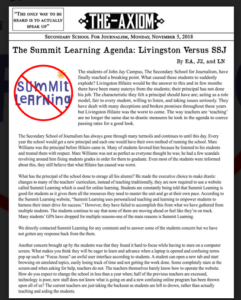 that next year, the Summit program would spin off to a  separate nonprofit corporation,  run by a board led by Priscilla Chan, Zuckerberg’s wife and the CZI Chief Financial Officer.  Diane Tavenner told reporters  the new corporation “doesn’t plan to expand the program, but rather, the new nonprofit will focus on meeting current demand.”  Yet a few days ago on Twitter, I saw that Summit is still entreating schools to apply .

Below is a fact sheet I have shared with parents and students at Summit schools nationwide, along with questions they can ask their schools and districts about the instructional program, its data collection and privacy protections (or lack thereof).  The fact sheet is also available as a pdf you can download here.

As it points out in more detail, parents have the right to demand that their children’s data be deleted from the online platform, according to Summit itself, and to opt out of their children’s directory information (name, email, student ID number etc.) provided to Summit from now on.  Here is a sample letter you can send to your child’s principal:

I hereby demand that all the data of my child [name] in the [grade] be immediately deleted from the Summit online system, as is my right according to the Summit Privacy Center. I also want to make it clear that from now on, I opt out of  [his or her] directory information provided to Summit, including name, address, student ID number, email address, etc.  This is my right according to the Summit Data Privacy Addendum.  Please respond as soon as possible to let me know that you have understood and complied with my request.

Bravo to the courageous students at Secondary School of Journalism, who are fighting  for their own right to privacy and a quality education, vs Zuckerberg,  Gates and the other ed tech oligarchs who are attempting to control their classrooms and their personal data.  As the recent NY Times series pointed out, Silicon Valley corporate leaders and engineers want one kind of screen-free education for their own kids, while imposing  mechanized schooling on everyone else.