Heather Hicks is a parent and teacher who resides in Lacey Township, New Jersey.  She spoke up at her school board meeting, criticizing Edgenuity – an online learning program produced by Pearson that her son’s school was using. In Heather’s words,

My concerns continued to grow when my son began to complain about his Biology class and a program product they were using for Blended Learning. I researched Blended Learning, the specific program- Edgenuity, by Pearson, and spoke with other parents and my son’s friends. I also watched some lesson segments with my son. The program was garbage and I spoke at two board of education meetings about it. The district ultimately did not renew the contract, and many parents and students were relieved.

Heather was surprised to discover later that she was repeatedly criticized by Bruce Friend, the chief operating officer of iNACOL (the International Association of K-12 Online Learning) in a February 10, 2016 workshop he gave at  Pearson’s CITE 2016  conference – in a presentation called “Gaining Stakeholder Buy-in for your Online/Blended Learning Program.”  He later gave the same presentation at the Mid-Atlantic Conference on Personalized Learning, where the session was described this way:

It is difficult to conceive of how effective strategies for gaining parent support would include attacking concerned parents by name, (although at the second forum he mistakenly called her “Heather Micks.”)  He showed a screen shot of her face taken from the school board presentation, and accused her of being ignorant about the purported benefits of blended learning and technology.  He said she “killed just about three and half years of work” with her presentation, in which she had refused to “let the facts get in the way of the truth.”  He also revealed her son’s log-in data in the Edgenuity program – a violation of his personal privacy by both him and presumably Pearson – and suggested that the school board should have shut off her microphone.

More recently, Susan Patrick, the CEO of iNACOL, called online learning the “Trojan horse for education reform” in a video posted on their website.   This video was subsequently taken down from the website after the Parent Coalition for Student Privacy called attention to it, but the video is still posted on YouTube. 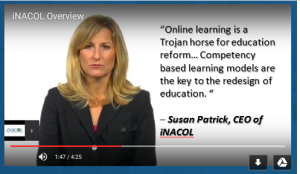 iNACOL’s board is chaired by Nicholas Donahue, the head of the Nellie Mae Foundation, and the organization is funded by that foundation as well as by the  Walton Family Foundation and the Gates Foundation, the latter with about $2.5 million since 2010.

Anyway, please check out this nine minute video which juxtaposes Heather’s calm and convincing presentation with Bruce Friend’s personal attack.  It is rather astonishing.