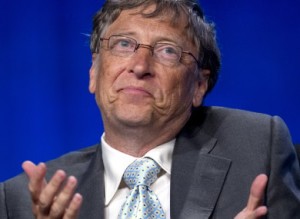 Bill Gates has had an enduring fixation on the need to expand the collection and sharing of personal student data. In 2005, the Gates Foundation organized a “data summit” among its grantees, at which launched the Data Quality Campaign, “to Improve the collection, availability and use of high-quality education data, and Implement state longitudinal data systems to improve student achievement.”

The Data Quality Campaign has received more than $13 million since 2013 from the Foundation, which they have used to advocate for the US Department of Education to weaken student privacy protections and to allow for the sharing of personal student information among state agencies, between states, and with researchers, test companies, and technology vendors.

In 2008 and 2011, The Data Quality Campaign, along with its “partners” among other Gates grantees, successfully lobbied the US Ed Dept. to relax FERPA, to allow for the creation of state longitudinal databases to link student data from preK through the workforce and beyond, and the disclosure and redisclosure of personal student data with a wide variety of third parties without parental knowledge or consent.

According to a participant in a webinar hosted by the Data Quality Campaign on April 14, 2011, Steve Winnick, a prominent DC attorney working for DQC emphasized the need to deny parents the right to consent or opt out of their children’s data being disclosed, saying, “we don’t want parents to get in the way.” You can see the 2011 fact sheet released by Steve Winnick and the Data Quality Campaign about the many ways the US Department of Education weakened this “outdated” privacy law in response to their advocacy here.

Earlier in 2009, the Foundation granted $22 million to schools, districts, and states for them to expand their data collection and disclosure efforts, and in 2011, spent $87 million to form the Shared Learning Collaborative, which in 2014 would morph into a separate corporation called inBloom Inc.

inBloom Inc. which would receive more than $100M in Gates funds before closing its doors due to parent protests in 2014, was a hydra-headed effort to collect the personal data from nine states and districts, store it on an Amazon cloud, with an operating system built by Amplify, and make it more easily accessible to ed tech vendors and other third parties without parental knowledge or consent. Here is more background on inBloom; here are a timeline and news clips.

Gates incentivized districts and states to participate in this project of data collection and sharing, with promises of big grants.  The Foundation also offered cash awards to vendors who would build their instructional products around this data, through  “interoperable” software.

inBloom was designed to help achieve Bill Gates vision of education: to mechanize instruction by plugging every child into a common curriculum, standards and tests, delivered by computers, with software that can data-mine their responses and through machine-driven algorithms, deliver “customized” lessons and adaptive learning.  By siphoning off the data into state and multi-state databases and then tracking children through life, educrats can better evaluate which teachers and software programs are effective, and also steer students towards appropriate college and careers, all in the name of improved “efficiency”. Gates has also funded multi-state student databases, which were illegal before FERPA was relaxed, including granting WICHE with more than $13 million, to enable the transfer of personal student information between fifteen Western states.

Since the demise of inBloom, the Gates Foundation has not given up their attempt to supplant real personalized learning with learning through software and machines. Recently, with the Future of Privacy, an ed tech industry group, they funded a survey that was pitched as showing that parents support schools sharing the personal data of their children, but upon further digging really showed the opposite.

Gates has also funded a new effort, in which 27 school districts along with The Consortium for School Networking, will create a “Trusted Learning Environment Seal” to reassure parents that their children’s data is safe. In this way, they appear intent on controlling the student privacy debate , and co-opting the intense parent concerns about rampant data disclosure that led to inBloom’s downfall.